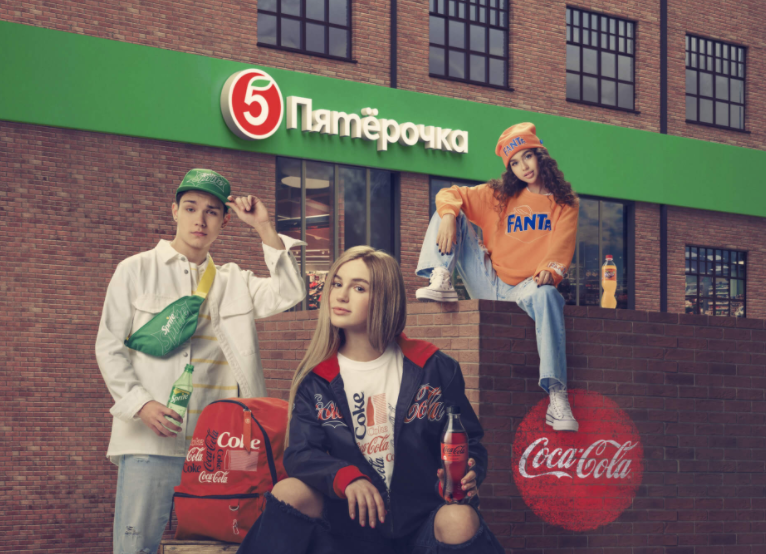 Russian retailer Pyaterochka, which is part of the X5 Group, and Coca-Cola in Russia have launched a streetwear collection made from recycled Coca-Cola bottles and other recycled materials.

Buyers of Pyaterochka receive points for the purchase of drinks produced by Coca-Cola in Russia, which are used to redeem various items of the fashion line. In addition to clothing and accessories, there are other prizes to be won, including the grand prize – an eco-tour of the Russian Altai region. The campaign lasts until October 31, 2021.

“We promote the concept of reuse and recycling. By launching this limited clothing line made from recycled materials, we want to demonstrate how plastics can have a second life. We are confident that our customers will love it, ”said Mikhail Yartsev, Marketing Director at Pyaterochka.

“With our streetwear collection of flashy and trendy clothing, we are targeting our young consumers as a priority, while encouraging everyone to protect the environment. Our slogan for this campaign is “Outstanding Taste” and offers different styles of clothing within the same concept: the Sprite line offers urban style items, the Fanta collection is more casual and Coca-Cola is back to classics. The complete collection contains something for everyone, ”said Oleg Mamaev, marketing director at Coca-Cola in Russia.

Coca-Cola in Russia and Pyaterochka created videos for television and online, showcasing the collection at a fashion show where models paraded on a “catwalk” among supermarket aisles. They also have a special Instagram GIF pack that allows users to virtually try on the different clothes in the collection to help them pick their favorites.

As part of the campaign, Coca-Cola in Russia and Pyaterochka are organizing several educational meetings at universities in Moscow, St. Petersburg and Nizhny Novgorod. Guest speakers will discuss sustainable fashion and aspects of an environmentally friendly lifestyle, such as sorting and recycling waste. Popular Russian bloggers and influencers will attend these meetings and promote the campaign on social media.

Food City and Bristol Motor Speedway extend their partnership with a multi-year agreement; The sponsorship is the second longest entitlement to the event in NASCAR history

Like the shoes she designs, Sarah Street’s wardrobe is classic, adaptable and…

I’m a fashion editor, here are the 10 minimalist clothing brands I always wear