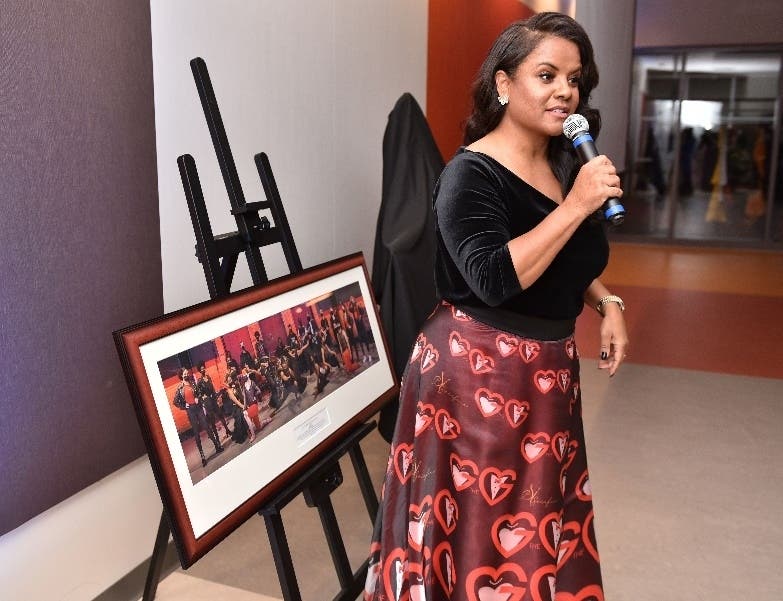 NORWOOD, MA — Maristela Rapo deeply understands what it feels like to not feel like you fit in. Through his Norwood-based non-profit organization called Give the glamorshe strives to make teens feel ostracized when it comes to having their dream prom experience.

Earlier this month, Rapo was jointly honored alongside Governor Charlie Baker by the Boston Arts Academy Foundation and the Boston Arts Academy with the prestigious Champion Award for her dedication to students. It offers designer dresses and tuxedos from greater Boston and New York along with a sense of place. economically disadvantaged students.

Originally from Brazil, Rapo grew up in the favelas, or slums, of Rio de Janeiro, raised by a single mother and then living with his grandmother among his siblings and cousins.

Find out what’s going on in norwood with free real-time Patch updates.

“It was a step up from homelessness,” she said, describing her childhood. “We were 10 to 15 in the house. I was always dressed in second-hand clothes, and studying was not a priority.”

Rapo dreamed of a career in the fashion industry, knowing that she had an innate talent for seeing beauty and bringing it out in others. After working as a housekeeper like her grandmother, she moved to Europe at the age of 17 to pursue a career in fashion design. On vacation in her native country, she met her husband, an American, who changed the trajectory of her life.

Find out what’s going on in norwood with free real-time Patch updates.

In the 2000s, she became the owner of two high-end fashion boutiques: Wolford in Copley Square and Long Island and Giuseppe Zanotti shoes in Boston. However, due to the recession, his businesses faltered.

“I was able to work and be trained by world-renowned New York fashion designers,” she explained. “I always ended up giving fashion advice to everyone.”

In 2014, his daughter Alexis inspired Rapo for Giving the Glam. She told her mother about students at Dover-Sherborn Regional High School in the METCO program who couldn’t afford to go to prom. She spoke with Monique Marshall, the METCO coordinator there, at a library fundraiser about her willingness to help.

“Four to five weeks later, she connected me with a young woman who was being raised by a single mother because her father had died of cancer,” Rapo said. “She needed help finding a dress for her prom.”

Hailing from Brazil, Rapo said she had no idea what a prom was or how much of a part of the fabric of American culture it was.

“I always thought the prom dresses here were ugly,” she laughed. “So I went to New York, where I bought my wedding dress, to help this young woman have a beautiful dress.”

Rapo pulled out all the stops, arranging for a hairstylist and makeup artist to work with the teenager, supplying her with hair extensions and all the accessories. She also hired a photographer and videographer to complete the perfect shot with a limo.

“She was really shy,” she said. “And I have a great personality, so it took her a while to feel comfortable with me. But the whole class reacted because she was so beautiful. She thanked me for having her makes her feel like a princess on her prom day.”

Within a year, Rapo helped 20 other economically disadvantaged children. His momentum grows. In 2016, that number exploded to 50, then nearly 90 the following year.

“My husband said, ‘If you keep doing this, you better apply for nonprofit status and become a 501(c)(3),'” she said. was very visionary about what I wanted to do. I wanted to give these kids the five-star treatment with a whole team.”

In 2018, Giving the Glam was granted nonprofit status. She has helped hundreds of college students in Massachusetts and New York not only find the perfect outfit, but also build their self-esteem.

“A lot of these kids struggle every day, thinking they’re not good enough or beautiful enough,” Rapo explained. “Some of the children grew up in shelters, attempted suicide or have special needs.”

“That’s not who I am,” she said. “People always ask me why they need brand new. But growing up with 10-15 kids at home, I know how important it is to have something new that’s uniquely yours. ”

She directs used dresses to a program called The beauty of the ball managed by Anton’s Cleaners to support this effort.

“I don’t want people to think it’s just a fashion thing,” Rapo continued. “I don’t just give them clothes. I give them hope. I just want to show them that they don’t have to feel less than everyone else.”

Rapo gave 17 Norwood High School students that sense of hope on Monday, when 10 girls and seven boys were selected by Giving the Glam to receive his services.

“NHS is very grateful to be part of Giving the Glam this year,” said Deputy Director Cindy Derrane. “The students Maristela met were so thrilled to be selected. One student described her as a fairy godmother.”

Another young woman worried about how she could attend the prom on a budget because “she felt like she would stand out and not look as good as everyone else,” according to the assistant manager.

“She said, ‘Meeting Maristela made me feel like it would be possible to be spoiled for a day. I’ve never experienced this before and I can’t wait,” Derrane said.

In 2020, Rapo provided a dream experience for three students with disabilities who were devastated by the cancellation of their proms. She documented their experiences in this YouTube video.

Rapo lamented that today’s culture places even more emphasis on looks because of social media and shames those who come from less fortunate backgrounds.

“It just shows the perfection that people achieve and all the good things,” Rapo said. “I would love to see someone post what they looked like on a really bad day.”

She provided dresses in sizes ranging from 0-28 to show that larger women who may be embarrassed by their true beauty inside and out.

“They think they need to get a big ball gown to hide their figures,” Rapo said. “I take them out of their comfort zone. I have a seamstress who works with each girl to make the perfect dress. I encourage them to wear dresses with spaghetti straps and high backs that will give them support.”

A mural in his Norwood store proudly displays his heritage in Brazil on one side and his life as a philanthropist on the other. Also present is his blue macaw, aptly named Rio.

This year, she is helping 60 teens in the South Bronx and another 140 in greater Boston. Students are recommended to him by their guidance counsellors. She went to New York recently, where she was able to arrange for the Ritz Carlton to rent her a conference room for New York promgoers to get ready for $1,500 instead of the usual $10,000 a day.

“When the doorman holds the door for them, these kids feel like celebrities,” she said.

Rapo thanked the Boston Arts Academy Foundation for the honor.

“BAA is an amazing nonprofit, and I’m so grateful to have the opportunity to work with them,” she said. “They have so many talented kids singing and acting and producing movies.”

Some of the students perform at the annual fashion show she organizes for those who receive donations.

“That way they can experience the joy of wearing their dresses and tuxedos twice,” she added.

“It was a pleasure to present our distinguished Champion Award to two extraordinary individuals who have shown a strong belief in the potential of Boston Arts Academy students and an unwavering commitment to providing equitable opportunities for all of our students,” said Denella J. .Clark. “Governor Baker and Maristela have been strong supporters and we are proud to have honored them.

Rapo said his dream was to win more sponsors to help even more youngsters shine.

“One day I want to show up in the middle of nowhere and give some of these kids this experience that they will remember for a lifetime,” she said. “We are magic.

“I’m not Mother Teresa,” she continued. “What I really want to give these kids is respect. I will never change that until the day I die.”