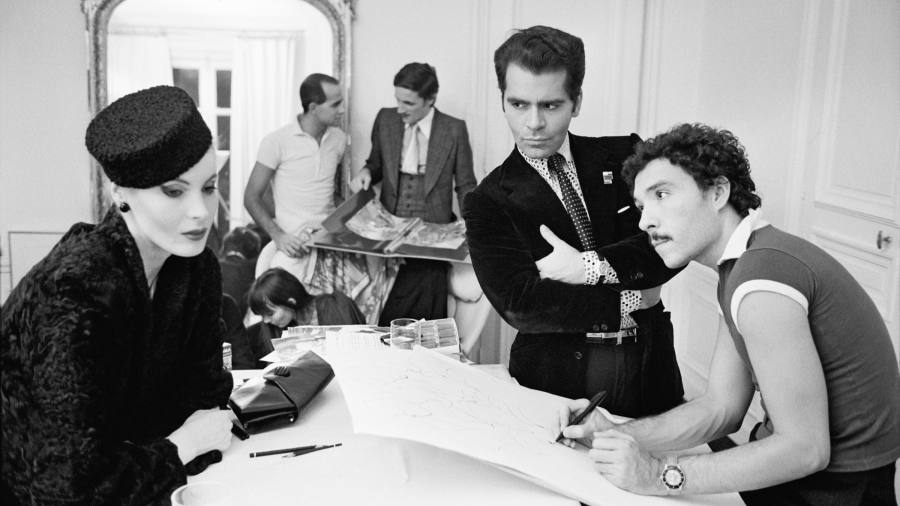 As We Rise: Black Atlantic Photography

From the Wedge Collection in Toronto, which exhibits artwork exploring black identity, As we rise celebrates photography from African diasporic culture. The images aren’t necessarily about fashion, but they do illustrate the power and joy of clothes as a means of self-expression: from Jamel Shabazz’s 1980s portrait of two smiling friends dressed in matching outfits as they take the New York subway to that of James Barnor photographs of 1960s London street style. they want it”. Opening$50

Karl Lagerfeld: A Life in Fashion by Alfons Kaiser

This biography of contemporary fashion’s leading man caused a stir when it was published in German in 2020 following his revelations about Lagerfeld’s parents’ connection to the Nazi Party. It is currently being translated into English for the first time. German newspaper editor Alfons Kaiser, who knew and worked with Lagerfeld for many years, conducted interviews with more than 100 of his friends, colleagues and associated fashion journalists. It has since been hailed as a “definitive account” of the creator’s life. Thames and Hudson£25

I Am Sparkling: NV Parekh and His Portrait Studio Clients – Mombasa, Kenya, 1940-1980 by Isolde Brielmaier

NV Parekh was an influential mid-20th century portrait photographer whose studio in the Kenyan port city of Mombasa, founded in the early 1940s, attracted sitters from across East Africa and beyond. Her clients visited to mark milestones such as weddings, graduations, birthdays and other sweeter occasions for about 40 years; this gave them the opportunity to assert their identity through accessories and clothing such as sari dresses, kanzu dresses, wigs and kofias (caps). A man recalls visiting Parekh’s workshop after buying a “one of a kind” fur belt so he could have a visual record.

Gathered in a new book, the collected archives offer an extraordinary insight into daily life. Some are “glamorous photos” that women ordered to hang on their walls or give to their husbands, other portraits are more inspired by Bollywood films – Parekh himself was born in Kenya to Indian parents in 1923, and many of its customers hailed from the city’s South Asian communities. “Indian film is about romance and dreams… There are always scenes of couples lounging in the moonlight and people gazing at the stars,” said Parekh, who died in 2007. “I think ordinary people go see movies in order to escape the harsher realities of life. They see their dreams come true on screen… That’s exactly what I would try to capture in the studio. Damiani45 € Sara Semic

In his initial sketch for the design of a new Yves Saint Laurent museum in Marrakech, French architect Karl Fournier envisioned “a wall of bricks as flexible as fabric”. His partner Olivier Marty, meanwhile, was inspired by it to create a building with a “lightness that would fall perfectly, like a well-cut garment”. The result, which opened in 2017, is faithful to these two original visions: an elegantly curved brick facade, almost windowless – to preserve the contents inside – but centered around a bright courtyard.

The design process, from first sketch to completion, is documented in diary form in a book by design firm Studio KO. It offers, via architecture, a new insight into Saint Laurent’s design principles and values. Like the aesthetic that inspired the creation of the building, the final structure is “simple but radical”.
Phaidon£39.95

The Fendi Set: From Bloomsbury to Borghese

As a teenager growing up in Lewes, near the south coast of England, Kim Jones often saw art historian Quentin Bell – the latter believed to be from nearby Charleston, where he had lived with his mother, the painter from BloomsburyVanessa Bell. “That was before I understood the complicated relationships and structures within the band,” Jones recalled of the radical artistic ensemble, “but I was fascinated by the ideal of freedom they aspired to.”

The Bloomsbury Set has been a big influence on Jones throughout his career – in 2020 he revealed to HTSI that he owned a valuable first edition of Virginia Woolf’s The Waves, among other valuable works. Her first Fendi womenswear show in January last year was inspired by Woolf’s Orlando, and her continued fascination forms the backdrop for The Fendi Set. In this new book, Nikolai von Bismarck shoots Charleston on outdated Polaroid and Super 8 film; he also photographs Naomi Campbell, Demi Moore, Kate Moss and Christy Turlington modeling Jones’ Orlando-inspired designs in Paris. Letters, journal entries, and excerpts from Virginia Woolf, Vita Sackville-West, and Duncan Grant also feature. “Fendi was founded in 1925, when the Bloomsbury Set was at its peak,” says Bismarck. “I wanted to create images that I felt had more in common with that moment than with this one…an ethereal sense of daydreaming in time.” Rizoli£97.50

Creations by Coco Chanel for Gloria Swanson in Tonight or never has a Gatsby the magnificent A movie set turned Ralph Lauren flagship, this well-illustrated title from design historian Jess Berry examines how fashion and interior design have contributed to the world of cinema – and vice versa. One chapter probes associations between villains, costumes, and modern architecture; another studies the textiles and silhouettes that established our ingrained association of women with chambers in film, referencing A pretty woman and love mood. Bloomsbury£23.99