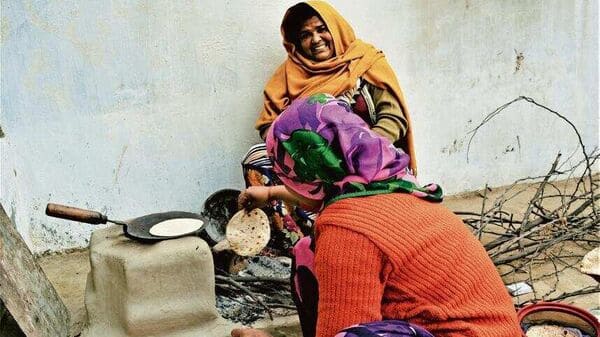 Deprivation takes many forms: lack of access to food, education and health care. The covid pandemic has aggravated all these deprivations and, worse, mortality too. Here we focus on food deprivation. The 19th century German statistician and economist Ernst Engel observed that “the poorer a family, the greater the proportion of its total expenditure that must be devoted to food”. Based on this law, we examine the evolution of food expenditure share during the pandemic.

We use the Center for Monitoring Indian Economy’s monthly data on household consumption expenditure in India from its Consumer Pyramids Household Survey between January 2019 and August 2021. We look at what happened to food expenditure shares in rural and urban areas, and among various income deciles, both waves of the pandemic, compared to a pre-pandemic period. To gain insight into changes in food composition, we disaggregate food expenditure into the amount spent on cereals and non-cereals.

Nutritional disruptions have emanated from both the production side (food production, processing and distribution) and the demand side (economic and physical access to food) during the pandemic. Food supply chains have been interrupted by restrictions on the movement of food and the closure of wholesale and retail outlets. The resulting food price hikes, along with unemployment and loss of income, have limited demand. However, demand for essentials such as grain remained largely unchanged during the lockdowns. Breaks in the food supply chain could have been avoided if the wholesale mandis within a state were better integrated in the sense that food products could be transferred from surplus to deficit areas. And, on the demand side, substitutions within and between commodity groups would have been smoother had it not been for the “panic” purchases of some households.

Pandemic-induced lockdowns have led to a sharp increase in the share of food in total expenditure in both rural and urban India. The share of food in total expenditure in rural India ranged from 45% to 50% and in urban India from 41% to 45% in the 14 months to March 2020. However, the corresponding shares increased to 61% in rural India. and 59% in urban areas of India in April 2020, a period that coincided with a strict nationwide lockdown. Movement restrictions at the start of the pandemic acted more as a temporary shock than a permanent one, leading to a decline in food’s share of total spending. But a slight increase (to 53% in rural areas and 51% in urban areas) occurred during the second deadliest wave (April-May 2021), when some Indian states used lockdowns and lockdowns. confinement as measures to control the spread of the novel. coronavirus, but no nationwide restrictions have been imposed. This phenomenon is observed among households at all income levels.

The Engel curves for food, which show how household spending on food varies with household income, shifted upwards between January and April 2020. In urban areas, before-after gaps in food budget shares over this period were larger for higher income households. deciles than for low-income deciles. This can be partly attributed to higher spending on food from outside, ready-to-cook/eat meals, and eating more expensive food as people worked from home. In rural areas, the gap was widest for the lowest decile, with a narrowing for the middle deciles and a widening for the upper deciles. That the poorest in rural areas have been most affected by the lockdown is not surprising. While the overall Engel curve shifted down once lockdown restrictions lifted, it remained above pre-pandemic levels even after the ferocious second wave ended.

A general downward trend in the share of food expenditure devoted to cereals is observed in both rural and urban India. Two findings are striking. First, while the urban trend of decline has been relatively steady, the rural trend shows jumps, and three peaks observed in rural areas after the onset of the pandemic in India coincide with the national lockdown (April 2020), the peak of the first wave (November 2020) and the rise of the second wave (April 2021). Second, the country has seen a sharp reduction in post-lockdown share in urban India, but no return to pre-pandemic levels. Clearly, income levels have not fully recovered and changes in relative food prices have induced substitutions within the household consumption basket.

On substitution, Nobel laureate Angus Deaton had argued, based on national sample survey data, that price-induced substitutions are generally limited to changes within food categories ( example: between low quality rice and good quality rice). However, if people experience massive price and income shocks, they are not unlikely to sacrifice other essentials to maintain subsistence food consumption. Thus, not only have good quality cereals been replaced by lower quality foods, but there may have been a move away from high nutritious fruits and vegetables.

The fact that the rural and urban poor (ie the bottom three income deciles) bear the brunt of these inevitable but unhealthy choices is a cause for concern.

It is presumptuous to claim that India’s Ministry of Finance did not see the writing on the wall. But if he did, and yet decided to cut the Centre’s food subsidy by about 28%, the money for midday meals by 12% and the funds for jobs under the Mahatma Gandhi National Law on rural employment guarantee of 25% in the budget for 2022-23 (compared to allocations for 2021-22), this would not only reflect an insensitivity to the needs of our poor, but also an ill-informed view that the growth of India has been held back by a lack of investment rather than demand.

Meet one of the fashion industry’s most requested illustrators