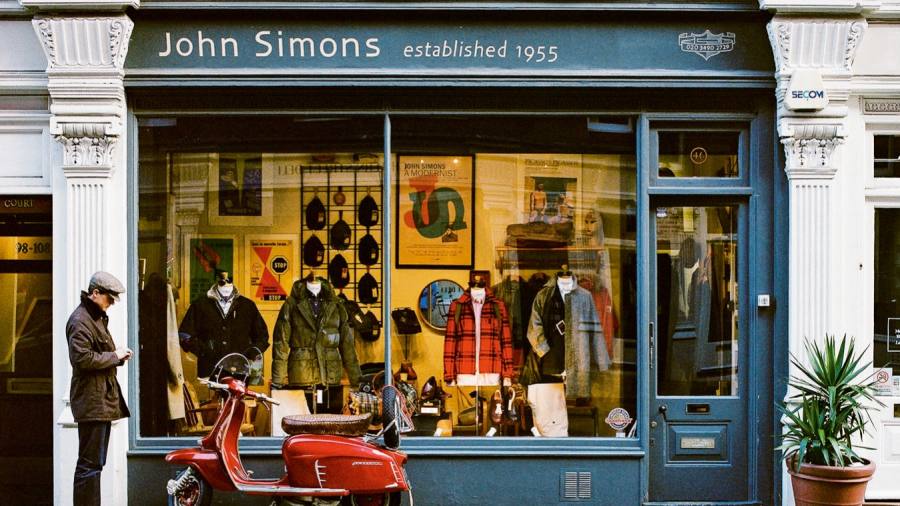 Soft-shouldered herringbone tweed jackets, round-necked Shetland sweaters, button-up shirts, chinos and moccasins worn with white socks… The foundations of the Ivy League style have hardly changed since it first appeared in the early 20th century. Started by elite American students on the East Coast who wanted clothing that could take them from the lecture hall to the sports field, it was later adopted by John F Kennedy, Steve McQueen and jazz musicians such as Miles Davis, crossing the Atlantic to Britain in the 1960s.

It is British ivy. No one else does it with the authenticity we have”

The man responsible for defining the British-Ivy look – more fashionable, with three-button jackets and gingham checks – was John Simons, whose Chiltern Street store is still one of the most influential purveyors of aesthetics. (Just recently he created a much-requested new collection of Shetland sweaters with Paul Weller, one of the store’s longtime customers.) Born into a family of clothing makers in Hackney, Simons started as a window dresser in the West End before opening The Ivy Shop in 1964 in leafy Richmond-on-Thames. He made a name for himself with well-organized rails of genuine American stock and hand-written maps describing his origins, while the nickname “Harrington” he gave to aviator-style tartan-lined jackets – after the character of Rodney Harrington in the soap opera Peyton Square – became the definitive term (he still sells his version for £350). His cult following allowed him to open under his own name in Covent Garden in the 1980s; then in 2011 it moved to its current location in Marylebone.

Inside, new and vintage clothes on mannequins sit with those handwritten cards still hanging from them. At the time, most inventory was imported from the United States, but although the store still sold other brands, it now manufactures many garments under its own brand. Home-designed tweed overcoats in black and ivory herringbone (£650), long olive green corduroy overcoats (£495) and high-waisted trousers in mottled brown herringbone tweed wool (£179) line the walls , as well as classic black calfskin. leather loafers (£320) and brass strap leather belts (£120). (The Weller collaboration is only available online.) “Our Ivy Oxford cotton button-up shirts and our unique overcoat, based on a style John wore in the ’60s, are our bestsellers,” says Paul Simons, son of John, who runs the shop day to day. Height favors male build, but that hasn’t stopped their designs from becoming popular with women. “They are drawn to our timeless style,” he adds. “They like silhouettes.”

Just as they are classics, the signature look changes, adapting and appropriating new elements such as work clothes (which American students would not have worn on campus), silk scarves and caps. panel plates. “It’s British ivy. Nobody else does it with the authenticity that we have at John Simons,” says Paul.

You can shop online, but it’s the vibe that keeps customers coming to the store. “The store was a printing press and the floors were covered in black ink when we got the keys. There was an original feel that we were looking for,” says Paul. Today, he says, “the majority of our customers come from London or travel from parts of the UK. Once someone came from Thailand just to come to the store.

Interest in modern art (they sell a range of mid-century exhibition posters), a jazz soundtrack or a famous face like Weller, Martin Freeman or Guy Ritchie – all fans – are particular draws . Just like John himself, when he enters. In the 2018 documentary John Simons: a modernist, producer David Rosen sums up Simons’ place in British culture: “He’s the godfather. As simple as that.”