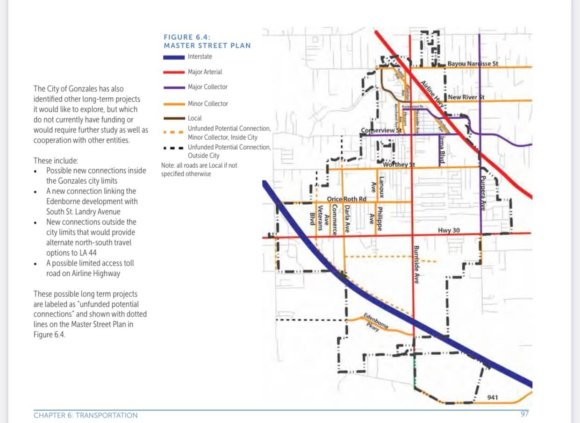 There was a time in the not-so-distant past when the development of housing estates inside the town of Gonzales did not spark a public outcry from current residents like that seen in Ascension Parish for a decade. . Those days are past as infrastructure improvements struggle to keep pace with the increased demand presented by an ever-growing population. With no slowdown in residential development in sight, municipal authorities will be grappling with these issues for the foreseeable future.

In 2021, Gonzales’ elected city council and the planning / zoning commission it appoints approved measures to allow another 900 housing units. Occupying these units alone, assuming two residents per unit, would increase Gonzales’ population by 15% (the 2020 census counted 12,231 city residents). Most of these units will be built along the busy Highway 30 corridor that provides access to petrochemical plants so vital to the local economy.

Along with the Mississippi River, the national highway is the economic engine of an entire region. A substandard highway 30, inefficient traffic and not as safe as it should be, puts all of this at risk. Improving its traffic jams is a monumental task requiring a concerted effort by local, state and federal authorities.

The road runs through the town of Gonzales from Airline Hwy (terminus east of 30) to St. Landry Road on the west side of Interstate 10. A decade has passed since discussions began for the construction of roundabouts at inside town (at Interstate 10 and Tanger Outlet entrance to the mall), a project funded largely by federal dollars. Patience is a necessary virtue while waiting for road projects.

The DOTD would like to widen Highway 30 to four lanes for a 20-mile stretch through East Baton Rouge, Iberville and Ascension parishes, according to the latter’s executive director. The state agency recently posted offers to conduct an environmental assessment through the Federal Highway Administration (FHWA). A long-discussed and much-desired new bridge over the Mississippi River will connect Highway 30 on the east bank.

Who can say when / if it will be built. Waiting for…

Building a 279 unit apartment complex on Cabelas Parkway, with entry / exit on Highway 30, surely won’t help. Sportsman’s Park Lofts, for which a 3-2 city council vote overturned residential density limitations, illustrates the choice facing Gonzales’ elected officials. The city is heavily dependent on sales and use taxes collected in the corridor of Highway 30 and, therefore, incentivized to generate more traffic. Is there a point at which the Law of diminishing returns kicked in?

Seen as a way to create a clientele for the retail outlets (mainly restaurants) located along Cabelas Parkway, the negative impact on traffic threatened by such a development was never discussed by the city council, nor by the five-member planning / zoning commission it appoints. .

The Comprehensive Plan of the City of Gonzales (adopted in August 2015) includes the plan of the Planning Commission for the Capital Region Transport master plan 2037. It includes “three phases of funded projects that will increase the capacity of roads in the Gonzales region:

The best-laid plans of mice and men often go wrong.

Next, a potential new I-10 interchange is designed (or not), in part, to divert traffic from Highway 30. According to the Ascension Parish’s MoveAscension website:

Attempts to divert traffic from Highway 30 are also being made within the city limits of Gonzales. Last January, city council authorized $ 102,732 to acquire the land needed to build a connection between Veterans Blvd and S Commerce Street, north of Highway 30 and east of I-10. Experienced motorists use both to escape traffic jams on the national highway, accessing the Orice Roth and W Worthey routes, but…

a new development, Village at Sawgrass, is underway with 115 residential units nearby.

Further east, the city has started to design St. Francis Connector Road, parallel to Hwy 30 to the south, which will connect Hwy 44 / Burnside to S Darla Street. Most of the road is being built as part of the development of Heritage Crossing. 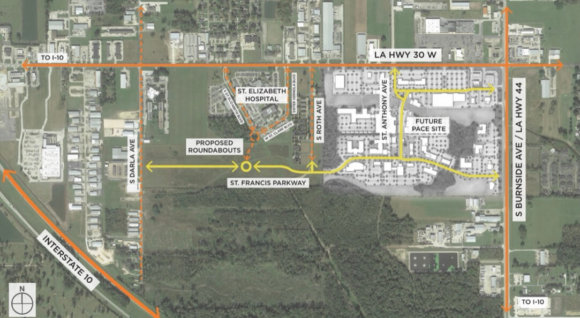 The passage south of Heritage Crossing includes this detour road.

The rest belongs to the City of Gonzales and St. Elizabeth’s Hospital, which owns the area over which the causeway is to be connected to S Darla Ave.

Diverting traffic from Highway 30 to Highway 44 / S Burnside is part of a concerted economic strategy. There was a time, decades ago, when the city fathers saw the Highway 44 corridor as Gonzales’ next economic engine. Time and events beyond their control have marked Highway 30.