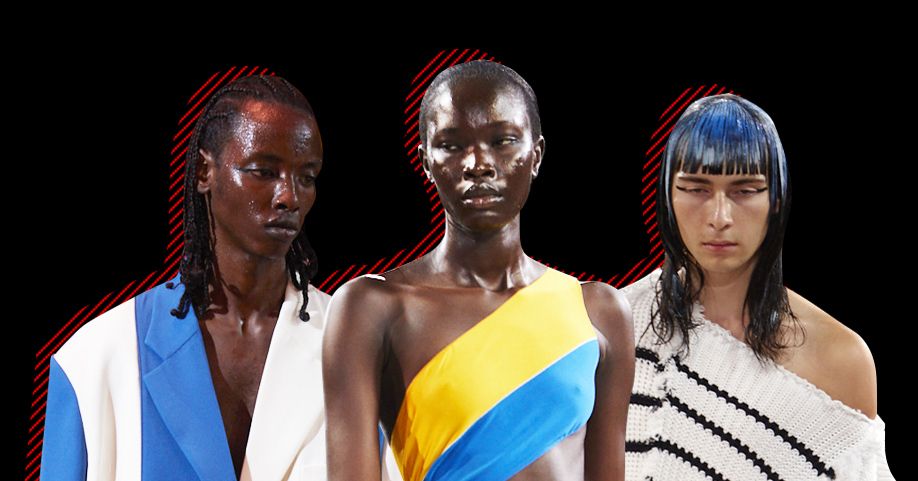 Marni.
Photo-Illustration: by The Cut; Photos: courtesy of Marni

Around 8 pm Saturday evening, our driver, Franco Magnani, who called himself Fred, dropped us off in a dark street corner in Milan and, pointing at us: â€œIt’s over there. We found the entrance to the Marni show quite easy, as there was not much else in the dingy factory area and groupies were waiting in the street near the entrance, although nothing to compare to the hordes outside of most shows.

Only with hindsight would this disharmony – between how things appear on the outside and what they really are – would become meaningful. Earlier in the day, I attended Giorgio Armani’s show, which was held in the theater of his central palace in Milan. The space hasn’t been used for shows for twenty years, not since Armani’s heyday as king of soft tailoring. This style, now in marine tones of green and blue, was still masterful. Yet, considering the crowd of young people on the boarded up sidewalk, one would have thought that something important was happening. The disconnect was even greater at Ferragamo, where the clothes – weird diaper style changes, cotton ponchos, absurdly high-waisted pants – had little relevance. They certainly did not justify the frenzy outside.

Marni was the totally opposite experience: Everything that happened, everything that was real and emotional, happened as the spontaneous result of a few hundred people gathering in a damp building to look at clothes. Since the start of the pandemic, it’s a big question in the industry’s elite level: what would it be like to come together again? How should we feel? And how could a designer seek a strong emotional response? I doubt Marni’s creative director Francesco Risso himself would know how well things were going to turn out, despite the considerable planning that went into the show. This included dressing guests in the audience (mostly with hand-painted cotton striped shirts, baggy pants, or dresses); bringing together a choir and small orchestra, and working with the remarkable musical artists Dev Hynes and Zsela, who sang Hynes’ slow and moving work, “Guide You Home”.

Indeed, I suspect that it was only in Risso’s subconscious that he felt that all of these elements could come together. So it was a huge risk.

Instead of a straight track, there was a circular wooden platform surrounded by a series of wooden risers for the audience, the wood material apparently recycled. The decor was not fancy anyway. The editors and writers laughed and admired each other, in stripes of different colors, but it was difficult at first to understand why we too needed to be equipped. We were still seated in a group, in public.

I don’t remember if the show started with models or choir members walking along the risers as they sang. Within minutes, the audience was inundated with people. It was the most extraordinary cast. We hear a lot today about diversity and gender fluidity, to the point that these principles can seem almost banal, especially when pushed during a fashion show.

Still, Risso’s diversity seemed unforced – as ordinary in its extremes as you see in most big cities. The clothes also matched the audience’s attire, though bolder and more exaggerated. Oversized blazers featured broad rugby stripes, while jersey dresses had spiral stripes that split open at random locations in the seams. There were dresses and tops covered in stiff, colorful daisy bouquets, and a gorgeous, gigantic Breton striped poncho-style sweater, with a silver-embroidered daisy cutout on the front. The clothes looked cool – quirky, comfy, not so trendy. The punk headdresses worn by some models were the work of legendary hairdresser Julien d’Ys. Molded from latex, they were originally painted black, but d’Ys later told me that the oily look of the creatures in a lagoon wasn’t the right vibe at all, so they did. been painted bright blue.

Risso also entered the show and then sat on the lowest riser. If one person had a galvanizing effect in the show, it was Zsela, wearing a blue and white daisy skirt and bra top, with matching shoes. She has an extraordinary voice, low and deep, and she intones the words slowly.


Little by little, as Zsela made sense of “Guide You Home”, the models in their wacky knits and stripes filled the circle, and the orchestra added a flourish, the spectators and the show came together. mixed up. Clothing is not art, but it can produce similar feelings of fun and community.

Ever since the New York fashion shows, people have casually questioned whether in the age of Instagram and big, corporate-owned fashion brands, designers are obsolete. There were surprisingly mundane collections in Milan, as if the brands had cynically – or fearfully? – identified a few signature styles, then hit the repeat button. Marni, however, demonstrated that creative designers are not obsolete. As Risso rose from his seat and joined Zsela and the models on the stage, the audience erupted into loud applause. Some people got up and some even cried.

Armani’s collection has been effective in its own way, partly because the designer, who is now 87, does not deviate from its aesthetic and partly because the palette of sea and seashell tones (dotted with hot pink) was so sublime. In the first dozen looks, Armani offered so many styles of jackets. Who does this today for its eclectic and worldly clientele? Not a lot. He reminds me a lot of Saint Laurent in the twilight of his career. The man did it all, and now he’s talking in a low voice.

Marco Zanini also had a great collection, with the finest quality fabrics and original prints. This is no small feat for an independent brand. This season her clothes had a fresh airiness, with loose striped skirts in dark blue or brown cotton, a beautifully cut shirtdress in an ivory silk crepe basket print, her comfy wide leg pants and oversized white shirts in luxurious Sea Island cotton, including one with a very wide tie that you can turn into a bow or stole. Zanini thinks of every detail.

The Milanese shows ended with an unexpected coda: a combined show, in Gianni Versace’s mansion, with Fendi’s Kim Jones doing her version of the Medusa prints and Versace chainmail, and Donatella Versace playing with the signifiers of Fendi. The designers, with Silvia Venturini Fendi, concocted the unique collection last February around a meal. The connection between the two labels makes sense in a way: Gianni Versace and Karl Lagerfeld were great friends. Collaborations are also popular. (Do you remember the Balenciaga-Gucci meeting last spring?) A writer said to me: â€œBut who wins?

I would say, looking at the images of Shalom Harlow in pale pink ‘Fendace’ lace and Kristen McMenamy in a drooping gown with big gold safety pins, that Versace probably comes out on top, simply because of Gianni’s original iconography. is so durable. But in another sense, the question is silent. â€œFendaceâ€ marks a common moment, a return, but it is still only a moment of disappearance.