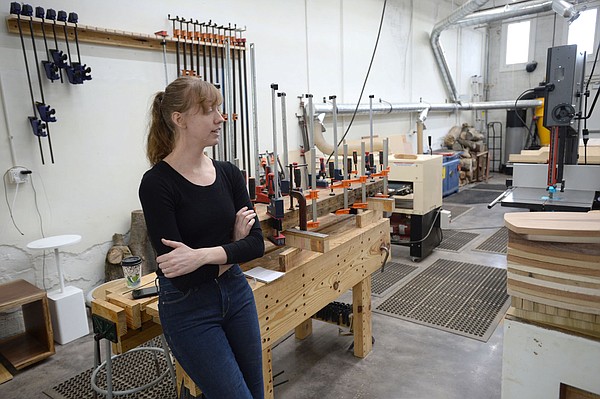 SPRINGDALE – Downtown Springdale is becoming an artists’ enclave, according to a shopkeeper.

The city also offers the promise of public art in a new Luther George Park and Jones Center. Local art projects have been used to draw residents into public comment sessions, and local artists work as part of the design teams for these spaces.

Waycaster Pronia said she wanted to help her neighbors express the pride she feels in Springdale.

This soap and candle maker noted that many stores in the area have candle scents named after their towns. But Springdale doesn’t and she intends to make one.

“There aren’t a lot of handmade things in Springdale,” she said. “I want to change that.”

Rachel McClintock, who has a shop and studio on Spring Street for her handmade furniture and other millwork pieces, said she found a supportive artistic community in Springdale and a community receptive to their work.

The development of the artistic community likely came from the collision of happy accident and deliberate planning, said Amber Perrodin.

Perrodin is an artist, printmaker, owner of an art supply business on North Shiloh Street, and community manager for the Creative Arkansas Community Hub & Exchange in Springdale, a nonprofit agency supporting artists with studios, galleries and grants. The program is an effort of the Northwest Arkansas Council.

“Art gives us a broader view of the world,” said Sharon Killian, president of Art Ventures in Fayetteville. The non-profit program provides support to artists with galleries to exhibit their art to make it accessible and to educate the public about the value of art.

McClintock said his gallery allows him to talk to every person who buys one of his pieces. She has studied in depth the dendrochronology of trees – or their growth – and shares her knowledge about the piece.

She said she wanted her customers to have a greater respect for the tree and where it came from.

McClintock spent time learning woodworking in the Asheville, North Carolina area. But she found the atmosphere competitive and negative.

“And, on the East Coast, there are a thousand craftsmen better than you,” she said. “It’s less about support and more about competition.”

McClintock said she appreciates the support of Springdale’s arts community.

“If you call them on the phone, they’ll pick up and talk to you,” she said.

She also noted that the public mostly comes without judgement.

McClintock said business was good, although his store is hidden behind the construction of the Via Emma residential complex which rises at Emma and Spring. Demand for her cutting boards hasn’t left time to fill her gallery with her furniture, she says.

Waycaster Pronia started her craft at home as a way to deal with work stress. When bars and balls of soap were piled up in her living room, she started selling at craft fairs, she said.

With Matsubara’s encouragement, Waycaster Pronia has rented a space a few doors down from the patisserie, which also displays and sells the works of a local potter.

McClintock also highlighted the support she received from her building owner, Greg Taylor. But Taylor balked, saying he’s just a realtor who loves Springdale and wants downtown to succeed.

As Taylor seeks customers downtown, he envisions different uses for the buildings — something that will be sustainable downtown, he said.

He added that he had turned down several opportunities that just didn’t fit the downtown mix or what he wanted as an owner.

Taylor owns the building that housed Spring Street Grill on Spring Street. The popular restaurant had to change its business model due to covid-19. The grill owner has downsized the space next to the grill’s old location and focused on catering. But the company still sells its famous orange pies and rolls in this little storefront on Spring Street.

Taylor said he is planning upscale apartments above the old grill building. Future residents of the building will be able to shop at the McClintock store.

“We want to surround him with people who can support his business,” he said.

Springdale is lucky, McClintock said. For many years, the city was neglected while other downtown areas in the region were booming.

But it has allowed the arts community to try new things and grow their art with the district, she said.

Interform, an association dedicated to fashion design, offers sewing lessons to Congolese and Marshal residents and presents their creations in its local window displays and fashion shows. The Shiloh Museum of Ozark History has opened its assembly hall to a Marshallese man to build a traditional boat – which has been sent back to his homeland. Dia de Los Muertos – the Day of the Dead in the Hispanic tradition – was the subject of an exhibition last fall.

Perrodin, a Springdale native, said she’s the fifth generation in her family to live and work downtown.

“I know what was and what could have been,” she said of Downtown. “I want to bring downtown Springdale back and make it as cool as other towns.”

Dabbs credited Perrodin and other artists who helped develop downtown when the downtown master plan was passed in 2015.

Artists are drawn to downtown Springdale because the space is affordable. McClintock and Waycaster Pronia create their pieces at the back of their buildings. An open space allows customers to watch these artists at work.

The current mix of artists might lead outsiders to consider craftsmanship as Springdale’s artistic niche. Experts say the identity is still developing.

“Craftsmanship is art,” Killian said. “And, of course, it will be a mix. That mix has to do with the community and who they are.”

“Each community is going to reflect the personality of the people who live there,” she said. “Each has different nuances and story.”

Bed Bath & Beyond decluttered its stores and ended up frustrating shoppers