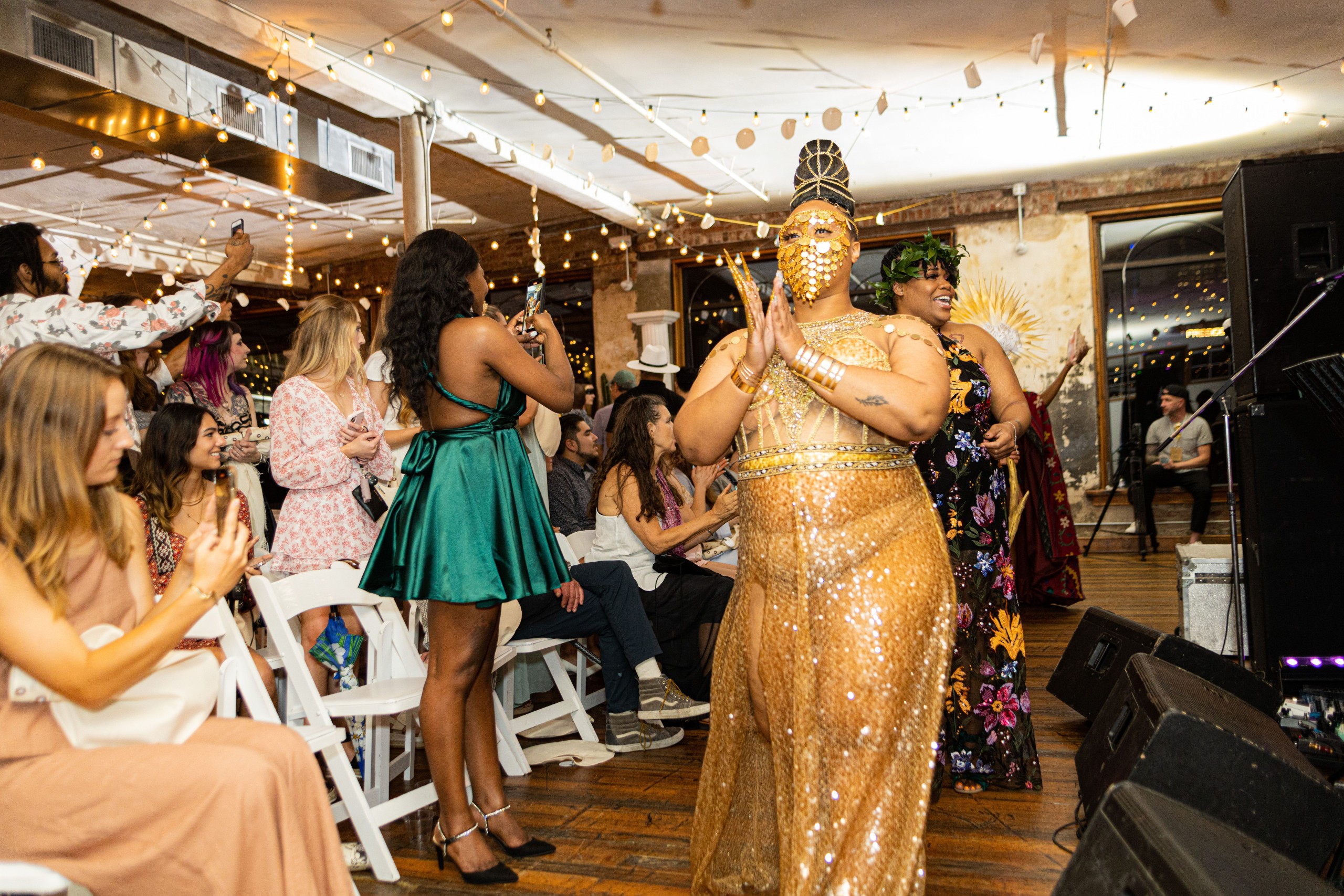 Glitz and Glamor at the 2022 West 18th Street Fashion Show

Planned months in advance, the show was shaping up to go off without a hitch, but due to a last-minute thunderstorm forecast, the stage crew rushed to move the event indoors. For safety reasons.

The original track was to be an elevated platform on 18th Street, located outside The Bauer, a historic warehouse in the Crossroads neighborhood. Seating consisted of individual chairs with bleachers behind them.

Amid the fast-paced execution, everyone was on deck rearranging the seating and sound setup. An eleventh-hour jamming show, it showcased the creativity and quick-wittedness of a highly skilled team here to elevate fashion on the subway by any means necessary.

As patrons grabbed drinks at the pre-show VIP party, stagehands could be seen unloading microphones and speakers from the elevator and quickly transporting them into the Bauer’s indoor ballroom.

During the same period, West 18th volunteers and board members had to deal with the new seating arrangement. The balance finally stabilized just as the finishes were given the go-ahead.

Apart from the change in patterns, West 18th has taken on a more traditional vibe this time around. Last year, the effort included collaboration between architects and construction companies, and 2020 produced the film Summer in review.

By focusing on a single runway and separate displays of each batch of garments, the display was stripped back to the essentials.

As models walked the perimeter of the venue during the show, the Summer Coliseum quickly came to fruition through the garments on display. From gladiator-style leather garments to flowing dresses with hand-woven embellishments, each designer’s multi-faceted touches were finally taking center stage.

The nine former Metro designers included 3 Minc, Renee’ Larouge, Craig Rohner, Birdies, NidaLu Handmade, Red Hare Leather and 2S Design House. One of the only outside artists featured was Zaid Farouki, a Dubai-based designer. His pieces can be found on his website and on Instagram.

When each designer was tasked with generating their own concept on the theme, NidaLu Handmade co-owner Courtney Varner was left with a stroke of luck. Part of her collection, which fit the theme perfectly, was actually conceptualized and produced before the pattern was released. His luck took shape in a layered metal pendant inlaid with the outline of the head of the mythical Gorgon Medusa.

NidaLu’s inspiration was stirred by Greco-Roman mythology and more. Varner says, “This collection, in particular, was really inspired by mythology, religion, and fairy tales.” She decided to dedicate a Greek goddess to each of her models. From a seashell used as an ode to the painting “The Birth of Venus” and a bow to arm her Artemis, the props accentuated each character.

Each of NidaLu’s garments was made from Suzani fabric, a tribal textile native to Central Asia. The material was embroidered in large, symmetrical designs and greeted viewers with a warm color palette.

Even though most creators are engrossed in last-minute multitasking, makeup questions, and costume crises, a few serve as West 18th show directors.

Birdies Senior Artistic Director and Co-Owner Peregrine Honig celebrated her 22nd year with West 18th. Operating Birdies alongside Alexis Burgrabbe, Honig brought their own products back to the show as a veteran brand.

As a designer and director, Honig knows the ins and outs of every show. Whether it’s portable delivery, staging, lighting, music or programs, she is the automatic reference. As productions vary wildly from year to year, she feels that the label of “fashion show” doesn’t quite fit the event, and even limits the scope of what audiences should look out for. expect.

Honig says while detailing the story of the event, “It’s not really a show, it’s more of a show. The things we bring have never been seen before.

While Medusa pendants were strung around the necks of some models, flowing unisex daywear adorned the shoulders of others. Among the multitude of cogs propelling an ever-spinning trend wheel are the face of every designer’s statement and those who give creations a frame to adorn: the models.

NidaLu Handmade model and Aphroditus actor Dawson Lambert says the show has been a great experience overall this year.

The Summer Coliseum marked Lambert’s first year walking in the 18th West. He attributes the lively energy and success of the show to the board of directors and its experience in planning previous programs. He’s appeared at Kansas City Fashion Week, the ICT Fashion Tour in Wichita, and works with smaller brands to promote their products.

Each “fashion show” evokes a multitude of different genres, levels and paths through which the costumers deploy their skill. Faye Woods, owner and operator of Red Hare Leather, delivered her models with chains and whips, absolutely exciting the peloton.

Red Hare has focused on the versatility of each item. Their models were highlighted for having a more androgynous look through their makeup. Each subject was illustrated in the same style: three were painted with a black band obscuring their eyes while the other two received a gold medal.

Woods says of their brand, “It’s about people who feel good about their bodies, their sexuality and their gender, and just show their strength.”

Red Hare Leather featured harnesses in dark brown and light brown, a pair of black suspenders and ecru bracelets. Even a gladiator-inspired white skirt floated on the floor.

After the former designers showcased their respective talents, main man Zaid Farouki wrapped up the program, bringing a taste of the Arabian Peninsula. Farouki’s brand operates its base in Dubai and specializes in embroidered designs as well as unisex clothing that combines comfort and tailoring for customers.

A Farouki representative said, “Obviously the Middle East is a conservative place. With Zaid, he breaks down barriers. He was one of the first Dubai-based designers to start creating unisex collections. »

His previous work has graced the pages of Harper’s Bazaar Arabia, and he dressed American rapper and singer-songwriter Pharrell Williams for the cover of Vogue Man Arabia in April.

As model Eva Von Schlemmer rounded the corner of the runway, a silent goodnight to the crowd whispered in the air. In a caged metal dress, her figure sent cascading light throughout the room. The ostrich-feathered plumes on his helmet bowed in thanks to the West 18th participants.

As West 18th’s board took one last lap around the track, draped in laurel wreaths to identify their messages, the band let loose on their cover of “We Are The Champions.”

All photos by Zach Bauman